A downloadable game for Android

QUEST / QUEST 2 PORT OUT HERE, ON GITHUB, AND ON SIDEQUEST

YOU MUST READ THE INSTALL INSTRUCTIONS BC FNFVR (PC) IS NOW A BENJINE MOD!!!!

"Isn't this just Beat Saber without the blocks?" VRTREND MAY 2021 ISSUE

Ever wanted to kiss Girlfriend FNF in real life? Well, you can't. This game doesn't let you either, but it does let you experience what it's like to be Boyfriend (especially how tall he is) and defeat all who oppose his relationship with GF with THE POWER OF MUSIC!!!

Controls: Move your hands in the direction you wanna hit when arrow over other arrow. And don't die lol.

GET THE SOURCE CODE HERE!

4) Can you add [modded character]?

Speaking of which, now's a good time to disclose:

Little info, you have FULL PERMISSION to stream, letsplay, meme, shitpost, do WHATEVER you want with the game. Use the music in videos you do, use art, ANYTHING. GO CRAZY BRO. If you do make any sort of video, it would be a bro move if you linked the game and spread the word Play On Newgrounds - https://www.newgrounds.com/portal/view/770371 Support on Itch.io - https://ninja-muffin24.itch.io/funkin If not no biggie we don't fully hate you only kinda no biggie.

Changes: the logo was changed to include the "VR" part.

1. Download the Benjine and run it to get the Mods folder

3. Extract the PCK files into the mods folder

3.5. Run your preferred VR runtime beforehand.  Idk why but somehow I am the only person in the world whose SteamVR boots up automatically when running FNFVR from the Benjine on PC

4. Run the Benjine and go to the Advanced Mods menu

https://drive.google.com/file/d/1nskxxMwVjoI_FDtasEl9lmP6Bz5OXdDC/view
by Donsalchichon90 · 2 posts
6h
Game not rendering
by Alanek2012alt · 1 post
32d
the game just didn't work on my device
by joe_mama420 · 1 post
36d
Game wont reset my height cuz of the hands being broken
by Fabliso_Offical · 1 post
36d
It wont run on my quest 2
by BarrettCollins · 3 posts
42d
the hands don't work on oculus rift
by gianluca 1.60 · 1 post
54d
My honest review on the update as well as addressing some issues
by Raccoonz · 1 post
54d
Game isn't working on Quest 2
by Sammy Animations · 2 posts
55d
Post a new topicView all posts 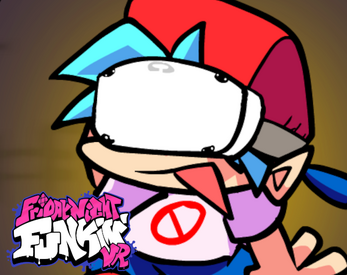